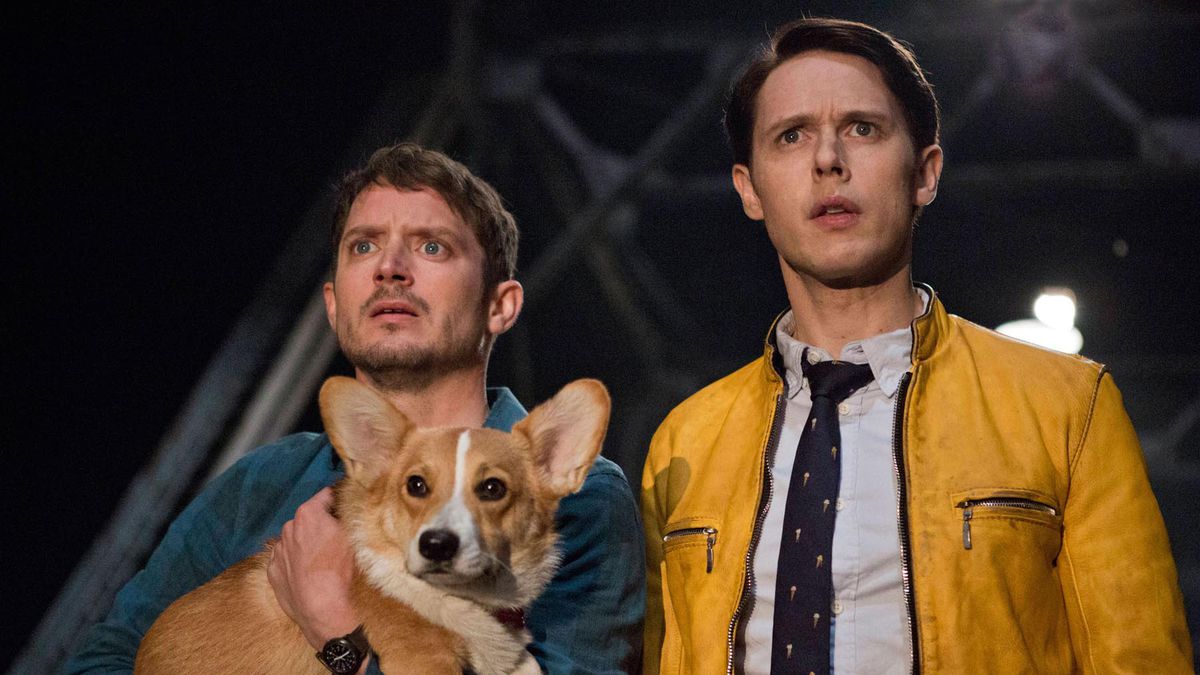 For the second time in the last six years someone has attempted the Herculean task of trying to bring to life the mercurial titular character of Douglas Adams‘ lesser-known Dirk Gently literary series. A 2010-2012 adaptation starred Steven Mangan as Dirk Gently with Darren Boyd as Richard McDuff (his hapless and mostly unwilling sidekick), in a pilot and three hour-long, standalone episodes (in the same vein as Sherlock). These were greeted with middling reviews and – while they kept some of the original charm and characters of the books – the show never felt like it hit its stride with the absolute weirdness and wacky charm it required. This year, we’re being treated to an American adaptation, and while we’ve kept the hour-long episode format, almost everything else is different and decidedly strange. There’s eight connected episodes making up a single story in this initial run (with more to come in a recently confirmed second season) and best of all, they’re all available to binge on Netflix!

In the original books, Dirk Gently’s Holistic Detective Agency and The Long Dark Tea-Time of the Soul (and I’ll add in The Salmon of Doubt for good measure) Douglas Adams introduces us to Dirk Gently, a detective who has some very strange ideas on what constitutes “detecting”. He believes in the holistic view of the universe: that all things happen for a reason, and as such, everything he does (or doesn’t do) still brings him closer to finding answers to cases that may or may not even exist. The original story came partially from an un-finished Doctor Who script (“Shada”) that Adams wrote in the ’70s and incorporates a lot of themes and ideas of Doctor Who. Not the least of which is, of course, time travel. In fact, Dirk himself could (with a little squinting) be seen as a stand-in or proxy for The Doctor, in the right light. So how then does this quintessentially British character translate to American-made TV? Surprisingly well!

In this version, the “straight man” McDuff is gone from the narrative and is replaced with Todd (Elijah Wood), a bellhop who has serious money troubles and a fractious relationship with his sister. Todd quickly becomes involved in a complicated, interweaving plot that incorporates all of the following (and more): psychic vampires, time machines, a holistic assassin, steampunk knights, E.S.P., the F.B.I., kittens, dogs, creepy cult members, hammerhead sharks, time travel, body swapping, psychic experimentation, magic lightbulbs, an electric rhinoceros, and Julian McMahon‘s unconvincing facial hair. Much like McDuff, Todd wants nothing to do with Dirk and his world, but the universe is very keen on making sure that he is deeply involved in every element of the unfolding plot. Todd’s deeply checkered past and his relationship with his sister both add depth to his character and form the emotional backbone of the series.

And then there’s Dirk. Samuel Barnett barrels pell-mell into this role with a surprisingly nuanced and accessible version of a character that, if played carelessly, could be beyond infuriating. He doesn’t have the brusqueness of Mangan’s version and manages to maintain a blithely likeable presence, even when doing things that seem completely moronic or incredibly dangerous. He has surprising emotional range as well, with some scenes showcasing him not just as a comedic presence, but as a legitimately effecting performer. He does occasionally suffer from the same issues The Doctor does in Doctor Who, in that he can easily feel like he’s only there for rattling off complex exposition and to be the Deus Ex Machina when required, but there is enough joyful silliness in there to balance it out. It’s also worthy of note that with an entirely American cast, they still understood how essentially British Dirk is, and didn’t attempt to Americanise the character.

The expansion of a story through adding extra episodes (usually with the goal of making it more U.S. TV-friendly) often dilutes the story and slows the pace. Here, however, the world of Dirk Gently is given a much broader palette and time to breathe; the series’ length allows more plotlines to be introduced, more character development to occur, and for better explorations of some of the thematic concepts. At times this feels like a road movie, at other times it’s a farce, sometimes it’s supernatural horror. By the end though, it’s woven a complex and intriguing narrative with a lot of humour and even more complete weirdness. Fiona Dourif‘s Holistic Assassin is completely bizarre and yet with time to grow and explore, she becomes one of the most fascinating sub-plots of the series!

The showrunner and regular director Max Landis is best known for his breakout film, Chronicle, though it was his run at Fantastic Four that many will remember, for better or worse. It was F.F. that also gained him a somewhat notorious Enfant Terrible reputation, due to rumours of  his volatile interactions with the studio and unconventional attitudes to the filmmaking process.  Here in TV Land, however, Landis is back in surprising form, making something genuinely unusual with a quirky vibe and a surprisingly dark undercurrent that is not as present in the original texts. He handles the sci-fi and supernatural elements well, but also displays a deft touch with genuine character interaction and growth. The series feels like it even has echoes of the brilliant U.K. series Utopia, partially in its music choices and tone, but also in its slightly oversaturated colour pallete and off kilter camerawork (or possibly it’s just the yellow jacket, I’m not sure).

Dirk Gently doesn’t succeed on all fronts, unfortunately; some of the hammy performances are chewing an awful lot of scenery to little effect and some of the special effects are decidedly… unspecial. It takes a long time to get its teeth into the actual plot, and occasionally it does fall back into a few clichéd tropes to push the story along. Some plotlines feel underdeveloped and others feel almost like they were inserted solely to add that extra bit of quirkiness to make the show just that bit more kooky. The series also feels a bit padded-out in parts, and those episodes where it rests on stereotypical tropes are the ones which feel the most like they could have been cut. There are also characters added in, late into the season, who would probably could have been introduced earlier, and others who might easily have been lost entirely, to no discernible difference.

Dirk Gently’s Holistic Detective Agency is an entertaining and bizarre science fiction show that somehow manages to wander far from its source material while simultaneously feeling like it’s still at home. It’s watchable and stylish, with a hint of bigger stories yet to come, and implications that other narratives have already occurred in the series’ storyworld. It may leave some fans of the books scratching their heads wondering where their favourite elements have gone, but it will likely still charm them enough to try another season.

Reader Rating1 Vote
75
A quirky and unusual science fiction romp
Feels like it's in keeping with the books
A couple of flabby trope filled episodes.
75
AWESOME