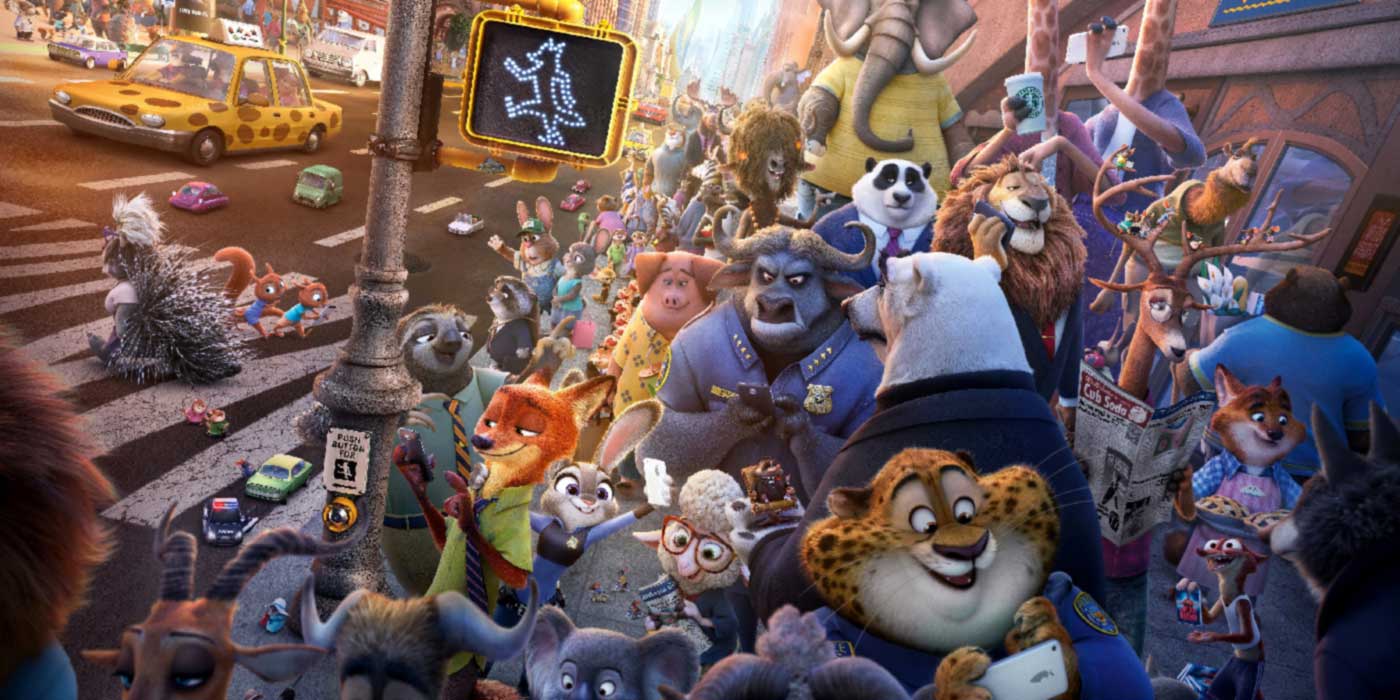 Following on from Disney’s hugely successful CGI animated films of previous years like Wreck-It Ralph, Frozen and Big Hero Six comes something different again in the form of a cute and funny animal story with a astonishingly dark underbelly; Zootopia.

While Wreck-It Ralph explored concepts of the disposable consumerist society, and Frozen gave us a bunch of great songs and some wonderfully nuanced female lead characters, Zootopia goes right to the heart of some of the biggest issues in today’s society; namely (and I’m not hyperbolizing) racism, radicalisation, terrorism and the culture of fear we currently live in!

The plot follows Judy Hopps (Ginnifer Goodwin) a driven Bunny rabbit who becomes the first of her kind to become an officer in the Zootopia Police Department. On her first day out she encounters Nick Wylde (Jason Bateman) a grifter/con-artist fox, whose species she has been taught to be untrustworthy of. Judy becomes embroiled in a far reaching missing persons case which eventually leads to a shocking discovery that shakes the very bedrock of animal society. The exposè of which then leads to fear based divisions between predator and prey species who have been living in harmony for centuries, if not millennia.
The moment that Judy chastises someone for saying she’s “Cute” saying; “You can’t use that word, only we can.”, its made clear that the creators have something really interesting to say here. Foxes and weasels are racially discriminated against in society for being untrustworthy or shifty and before leaving her hometown Judy is given a “fox repellent” (read “can of mace”) by her parents. Zootopia is a cultural mixing pot, yet jokey names like ‘Little Rodentia’ belie a city with huge cultural and economic schisms that are just as divisive as the different physical ecosystems. At the heart of it though,  is a story about a perceived benevolent ruling authority using irrational fear of “The Other” to control a populace and create an unequal and unbalanced society. Pretty heavy stuff to be explored by cute furry animals you may think, but you need only look back to Art Spiegelman’s comic series “Maus” or even George Orwell’s “Animal Farm” to see the fine tradition that this film is placing itself in.

Kids are going to enjoy this film, they’ll lap it up! It’s a sumptuous visual treat and the storytelling is clear and direct. The main plot is easy to follow and the character are very likeable. There’s a tonne of great jokes and one liners which caused gales of laughter from kids and parents alike in the screening I went to. (The sloths are a real high point) There were even a couple of legitimately scary moments which made the whole audience jump, which may possibly prove too much for the really young or easily frightened. Its got fantastic music too, and while its not a Musical, it always feels upbeat and boppy.

But it’s the parents watching; the ones who can decode the films message, who will have an even more rewarding experience with Zootopia. There’s a strong undercurrent of sly humour that most kids will just not get, and at the centre it’s a powerful story about making assumptions, changing expectations and learning to embrace the strength in diversity and not fear it.

Zootopia is an absolute must watch for parents, kids and in fact anyone with an open mind.