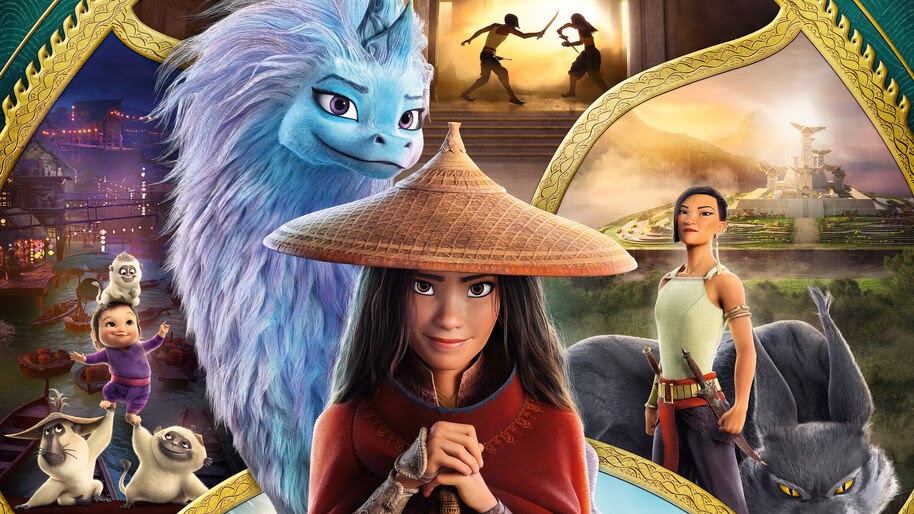 Quinny·
Podcasts
·April 1, 2021
A beautiful Disney animated film that occasionally feels a little by the numbers.
Raya is a wonderful hero and the story is important and subtly told using a stunningly complex sound and visual language. It's unfortunate then that it still feels a bit predictable and formulaic. It's lacking in both surprises and musical numbers.
Quinny
75
Dion
80
Jill
70
Peta
75
Outstanding Yak
90
Amyable
80
Panda Attack
90
Reader Rating0 Votes
0
Pastel Dragons
It's stunningly realised and the combat sequences are spectacular.
The world is gorgeous and lived-in; the food, the people, the cultures all are so vibrant!
The music is amazing, it has the feel of being both culturally relevant and modern
It's a completely new story and it's trying something different... but...
Angry Purple Druun's
It feels a bit formulaic and by the numbers - there are no surprises.
The Druun bad guys are a bit under-developed, they are just angry purple.
Not all of us were sold on the design for Sisu, especially her too-cute dragon face
No musical numbers? WTF?
80
AWESOME

Set in the magical, mythical, Southeast-Asian inspired land of Kumandra, we follow the story of Raya (Kelly Marie Tran) the Warrior Princess of the Heart people and her journey to find the last Dragon Sisu (Akwafina) and reunite the world. Raya and the Last Dragon is the new CG animated feature featuring a checklist of well-worn Disney tropes and a disturbing (and surprising) lack of musical numbers!

To the horror of Quinny, Peta, Jill and Dion, they find themselves forced to reckon with a Disney animated fantasy film purely on the merits of its film-making, without a sing-along option! (It’s like The Black Cauldron all over again!)

May the blessings of all the dragons of Kumandra alight upon the proud denizens of the lands of Stream, Twitch, Live and Chat or as we know them, our streaming family. Thanks for working that live-chat during the Twitch stream, each Tuesday night at 7:30pm AEDT. An especially magical thanks goes to any of you kind enough to support us by bestowing your blessings of cash into our jar via Ko-Fi! We are very excited to say that soon you’ll be able to subscribe on Twitch to keep your eyes peeled!

Every bit of your support helps us to (hopefully) keep entertaining you!