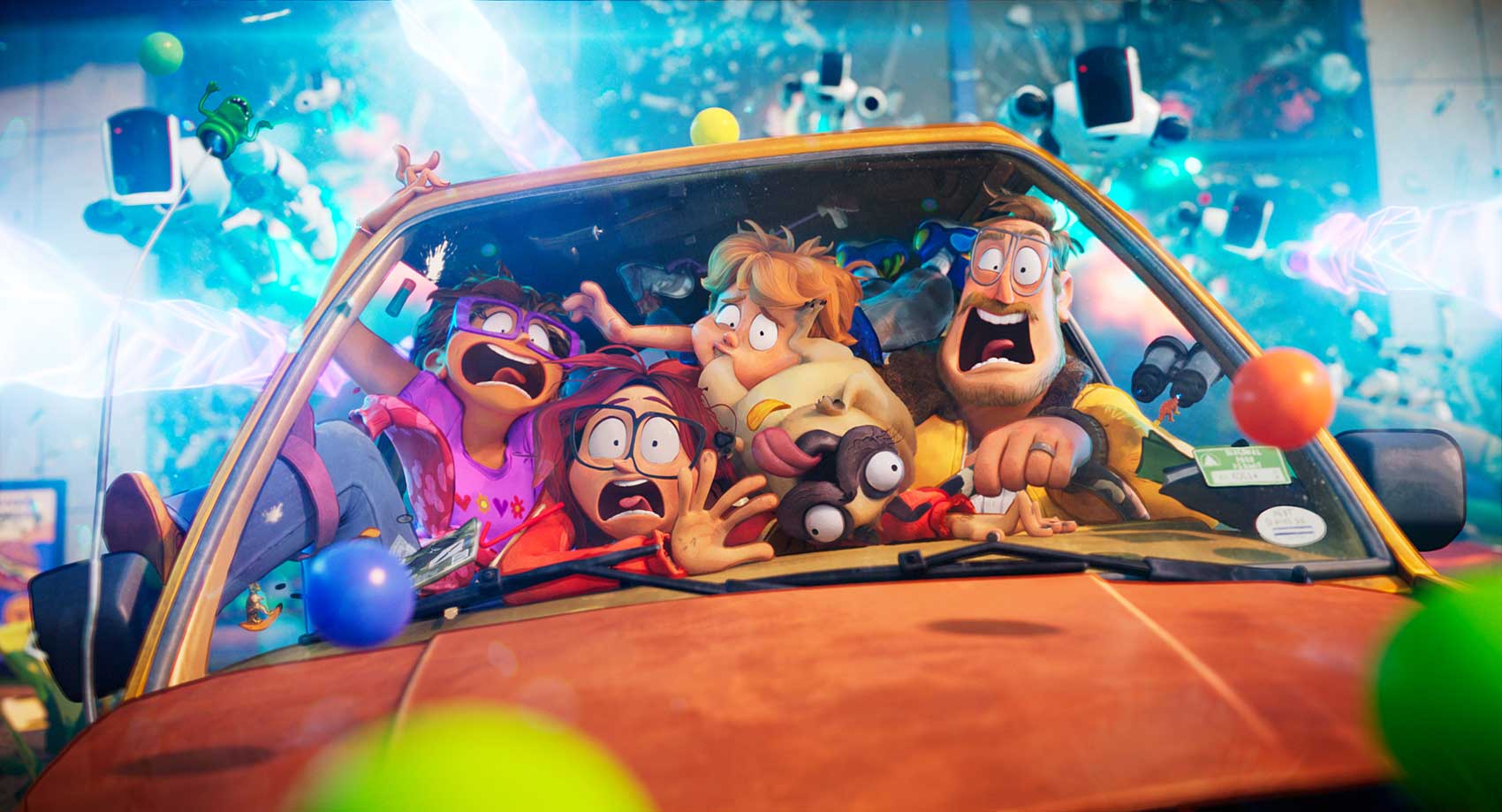 TPToA Podcast 218 – The Mitchells Vs The Machines

Occasionally a film sneaks out into the harsh unforgiving wilderness of the blasted, apocalyptic  entertainment landscape that we now live in thanks to, what will in later years be known as… THE STREAMING SERVICE WARS.  Look upon it; A small film, a wily survivor, born from the forbidden love of a traditional 2-D animated mother and a new-age computer generated father. See it furtively darting from the patch to patch of the rubble of enormous franchises now dead and gone. It is a mutant; a chimera whose DNA is purpose built for this harsh dog-eat-pug world; for not just scraping by, but actually thriving! See this film as it fearfully stands upon its hind legs and defying all good sense and survival…reaches for the heavens.

Ok it’s a strange metaphor, but so is the film. Hush.

The Mitchells Vs The Machines is deliriously weird and wonderful and we are HERE FOR IT! Dion the Pug, J.I.L. (your personal digital overlord), Quinny (the Q-dog-Cop) and The Petabot 5000 join forces to animatedly explore the hidden meanings in this film and then talk about their favourite: Dinosaurs, Triangles and Punctuation. Yes really.

A huge shout out to the definitely-not-robot weirdos who hold forth with binary (and non binary) brilliance in our live-chat during the Twitch stream, each Tuesday night at 7:30pm AEST. An especially large thanks (a 1000ft tall green triangle at least) goes to any of you kind enough to support our bizarre nuclear family of the digital age, by patronising us directly via our Ko-Fi jar and now also by subscribing on Twitch!

If you too like what we do, drop us a sub!  Every bit of your support helps us to (hopefully) keep entertaining you!

Send in voicemails or emails with your opinions on this show (or any others) to info@theperiodictableofawesome.com

A wonderful serendipitous surprise.
A funny and heartfelt animated movie that somehow manages to feel handmade, even though its completely CGI. Hilarious and loveable in equal parts.
J.I.L
95
Dion the Pug
85
Q-Dog-Cop
92
Petabot 5000
90
Amyable
90
Reader Rating1 Vote
50
Deborahbot 5000
Incredible visual style and charm that feels incredibly slick but also home-made.
Laughs a plenty all the way through. Great scenes and set pieces punctuated with great characters.
The heartfelt love of the characters and story is hard to fight; it's disarming in its sincerety.
Eric
It's MANIC. There are a lot of moments where you'll find yourself thinking WTAF is going on.
Some of the characters are a bit tropey and tired ones at that.
Its singular visual style may alienate some viewers. It looks weird and it is...
the 40 year old man's voice from the kid is distracting as hell.
90
AWESOME