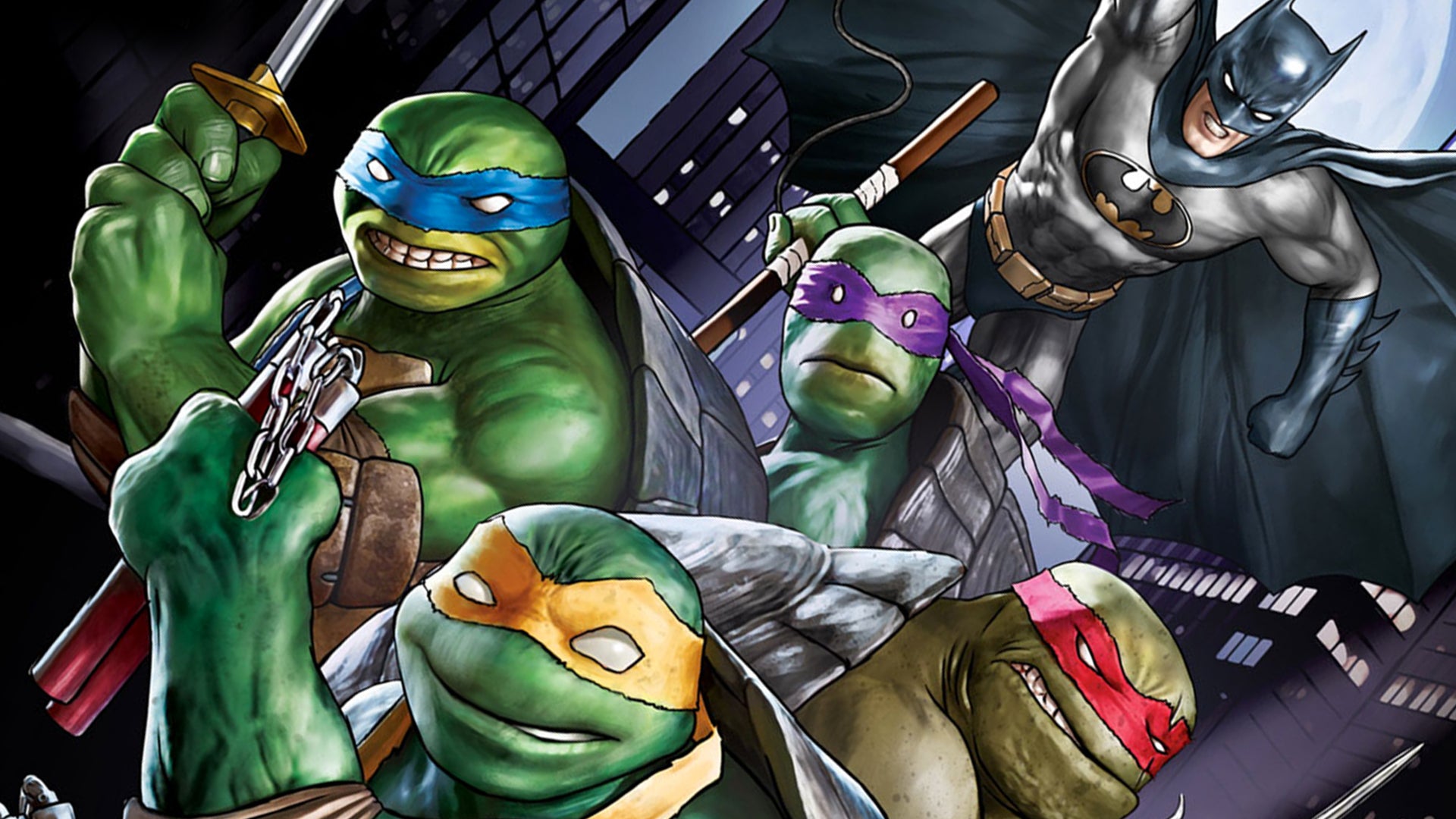 Initially, this seems like a really, REALLY dumb idea. It’s a bizarre mash-up of style and tone that feels more like it should be in the Batman: Brave and the Bold timeline, than any serious or more grounded version of the Batman mythos. But three successful comic book mini-series, a younger-audience themed spinoff (featuring brilliant art by friend-to-TPToA Jon Sommariva) and an appearance in the Injustice 2 video game all add up to demonstrate that those first impressions were dead wrong! Batman and the Ninja Turtles are a surprisingly good fit and this animated movie is the most visible expression of just that!

“The Teenage Mutant Ninja Turtles go to Gotham City and discover that the Foot Clan is working with the League of Assassins to reign terror over Gotham. Batman then teams up with the Turtles while investigating to save Gotham from the newfound alliance”.

Director Jake Castorena with Writer Marly Halpern-Graser (working from the original comics of James Tynion IV and Freddie Williams II), have created a strange but cohesive and entertaining film that  manages to capture the essential elements of both the Bat-Family and the Ninja Turtles while not being specifically tied to any one interpretation of them. This is not the 2012 Nickelodeon TMNT, nor the 2018 “Rise Of” version or, in fact any other existing animated version. Nor is this the now-familiar New-52-styled D.C. Animated Movie Universe Batman. Batgirl is a modern take on the character and this Robin is Bruce’s son Damian, but his Bat-suit is pure ’70s Neil Adams in style. This Penguin, however, is torn directly out of 2004’s “The Batman” with tones of Burgess Meredith for flavour. It’s a strange blend of styles.

There’s an all-new voice cast (including the impressive Troy Baker as both Batman AND the Joker!) but there’s enough familiar, talented voices (Tara Strong’s Harley Quinn for example) that we feel at home with the Bat-rogues gallery. The Turtles aren’t quite as recognisable or iconic in their casting, and even though their characters are well-delineated and clearly drawn, perhaps having a more familiar voice cast might have grounded them more. The film isn’t shy about referencing previous films and depictions of the characters (see Shredder’s entrance), so maybe a tiny bit of stunt-casting might not have hurt?

Plot wise, its all ‘by the numbers’: the Foot Clan are up to no good and Batgirl is the first of the Bat-family to run into them. Her interaction with the Turtles, however, is cloaked in shadow, so the stage is set for a case of mistaken identity. It’s pretty typical crossover storytelling, with a series of encounters of both heroes and their respective villains resulting in a bunch of confused assumptions about the other opponents. The Turtles assume Batman is the ‘big bad’, Batman is suspicious of these mutated monsters; they fight. They all realise that, actually, their enemies are their enemies’ enemy and suddenly they’re all working together. It’s comic-book crossover 101, but it’s done with enough style that you’ll forgive it.

The plot gets straight into the action quickly by eschewing the cross-dimensional reality-hopping setup of the comics and simply making Gotham a different North American city to New York (even if they’re basically the same, as pointed out by one of the Turtles). The narrative approach allows for potential sequels should the need arise, and encourages the cross-pollination of ideas, such as the League of Shadows and the Foot Clan being ancient rival ninja clans! The mashed-up nature of the reality works well, with new takes on old characters (the Jeff Goldblum/The Fly inflected Baxter Stockman is genius) and some fun new monstrous re-imaginings of beloved villains.

This film is a bit longer than the usual DC Animated Universe movies. The extra time allows for a more expansive plot, which feels like it has more neatly-defined beats and structure. As the film moves from act to act and we follow the antagonists’ character development, the plot undergoes some enjoy able shifts. This means that the third act feels more like a satisfying ending we have earned, where the stakes have ramped up impressively and the final confrontations have weight. It strays dangerously close to the ridiculous at times, and some of the mutations and monsters feel a bit silly, but because that’s what TMNT was all about, it’s pretty easy to imagine many of these Bat-rogues showing up in a TMNT toy line without anyone blinking an eye.

This is not a perfect film by any means, and occasionally the traditional 2D animation feels a bit cheap. Some character portrayals feel a bit ill-defined and off script for their usual depiction, while others are missing entirely (where are you, Bebop & Rocksteady? Splinter?). But overall, for the sheer silliness of its premise, it works a hell of a lot better than it has any right to. Seeing the Teenage Mutant Ninja Turtles having loads of fun playing in someone else’s sandbox is a real treat for fans of the TMNT. For that reason alone, it’s well worth watching!

Reader Rating4 Votes
88
Great voice acting and excellent casting of all major players
A mash up that feels very much like the style has been mashed as well as the characters
Its really really silly at times.
Tonally uneven, sometimes violent and adult, sometimes goofy and childlike
89
AWESOME