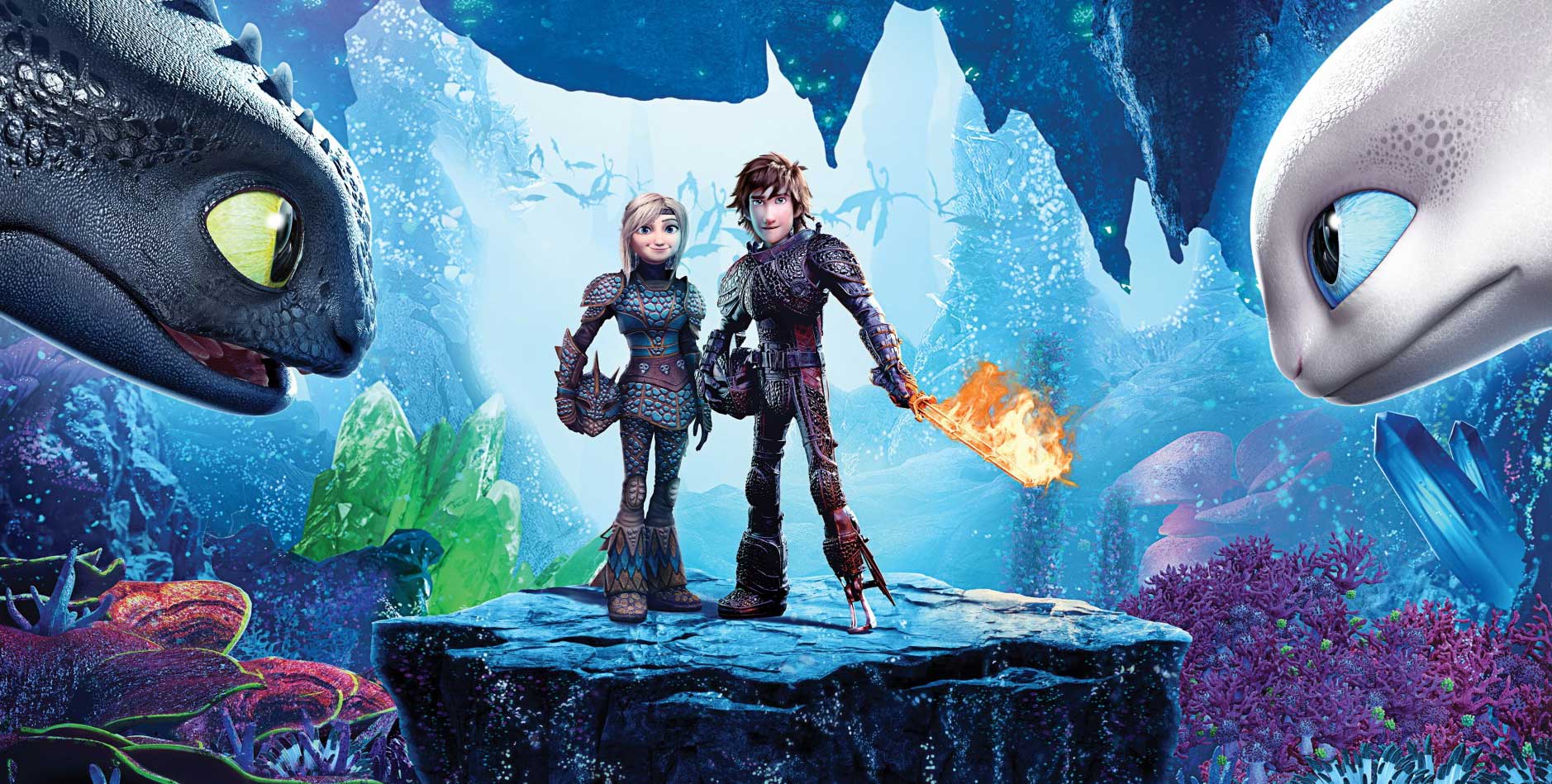 TPToA Review: How to Train your Dragon 3 – The Hidden World

How to Train your Dragon 3 – The Hidden World

Hiccup (Jay Baruchel), Toothless and the rest of the dragon-riding crew from Berk are back and they’re mad! Mad to be bringing this fantastic trilogy to a close, that is! After bursting onto the crowded scene of C.G. animated films back in 2010, the first How to Train Your Dragon was a surprise hit. It appealed to a massively wide spread of the audience. Female, Male, young, old and everybody in between. They all seemed to respond to this unusual, energetic story about finding your place in the world and making new friends with the things we have been taught to hate. It was a visual treat and featured gorgeous dragon designs as well as a large ensemble cast of loveable human characters.

The sequel, How to Train Your Dragon 2 managed to expand the world, increase the number of dragons and find a slightly darker, more adult tone that an audience who had aged 4 years really responded to. It also had the benefit of a successful TV spin-off in the intervening years, that had built on the first film’s success. It introduced us to Hiccup’s Mother Valka (played by Cate Blanchette), and brought Kit Harrington into the series as the dragon trapper Eret. It received excellent reviews but may have suffered slightly in the awards season by being released in the same year as Big Hero 6.

From DreamWorks Animation comes the highly anticipated culmination of one of the most popular animated franchises in film history, HOW TO TRAIN YOUR DRAGON: THE HIDDEN WORLD. What began as an unlikely friendship between an adolescent Viking and a fearsome Night Fury dragon has become an epic trilogy spanning their lives. In this next chapter, Hiccup and Toothless will finally discover their true destinies: the village chief as ruler of Berk alongside Astrid, and the dragon as leader of his own kind. As both ascend, the darkest threat they’ve yet faced—as well as the appearance of a female Night Fury—will test the bonds of their relationship like never before.

This film starts with an action sequence that would not look out of place in Game of Thrones or another gritty fantasy epic. The cool armour, daring fights and flaming swords, all swathed in a dark, foggy atmosphere, tell us that this isn’t the same bright and shiny, kid-friendly world as the preceding films.  Hiccup and Toothless are growing older and trying to be the best versions of themselves they can be as the rulers of their respective people, though the crown does not sit easy on either of their heads. A new threat from the villainous Night Fury hunter Grimmel (F. Murray Abraham) spurs them both into action, and the introduction of the female “Light Fury” Dragon complicates things even further by driving a wedge between our heroes. It’s not a particularly new or surprising plot, but it ties in nicely to the thematic centre of the film: putting away childish things.

This is a stunningly realised, with a distinctive visual flair that feels both similar to its predecessors, but also like a massive technological leap forward. In the 9 years since the first film’s release we’ve made huge steps in CG animation and thats all on-show here. The character models are more detailed, the animation is smoother and more fluid, and some of the wind and hair effects simply have to be seen to be believed. The characters are still familiar though and nothing feels like its departed too far from the original: The style hasn’t changed, just the execution.

It’s also a pleasant feeling, coming back to a world that you’ve enjoyed spending time in before; the familiar locations are comforting but also have evolved enough to be interesting again, due to the passage of time. But a series must also change and and expand, so while “The Hidden World” of the title is somewhat misleading as it plays such a small part in the narrative,(And seems to mostly exist so the dragons could be given a fluorescent paint job) It is as good a MacGuffin as any. It also manages to explain a lot about the chronology of the “Dragons” films and our own earthly history; giving reasons for why there are no dragons today.

Trilogies are difficult to get right unless they are tightly planned from the start. Giving us an ending that feels like it is paying off the entire series and not just the last film is a massive challenge. How do you give closure to all your characters, provide a self-contained narrative just for that film, and give it the weight it needs? With great difficulty it would seem. HTTYD 3 is a very solid and enjoyable film that certainly does as much as it can to tie up the two previous films and and the 6 seasons of TV; but is occasionally undermined by the need to be a stand alone film too. Grimmel is a cool enough villain, but lacks any depth in the over-arching plot and as such its hard to get fully invested in him as a nemesis. Yet if they’d used some of the characters from the series it would lose viewers of just the films. Its a tough balancing act.

Kids will love this film as it is highly energised and has humour in spades. Adults will enjoy it for its more mature plot elements and design. Movie series fans will enjoy a fitting end to their trilogy and TV series fans will be given an excellent book-end to a much larger world. It is a film thats working triple shifts to appease all its potential audiences and as such it occasionally gets a little fatigued. Its desire to please is heartfelt though and it will doubtlessly please you.

Reader Rating1 Vote
18
visually stunning and features great action sequences
there's emotional closure to a series that has been with us for nearly ten years
Some nice messages about growing up, growing apart and remaining friends.
The Villain, whilst relatively interesting, has little emotional clout: no "cool" factor
tries to please a lot of audiences and in doing so maybe spreads itself thin
83
AWESOME