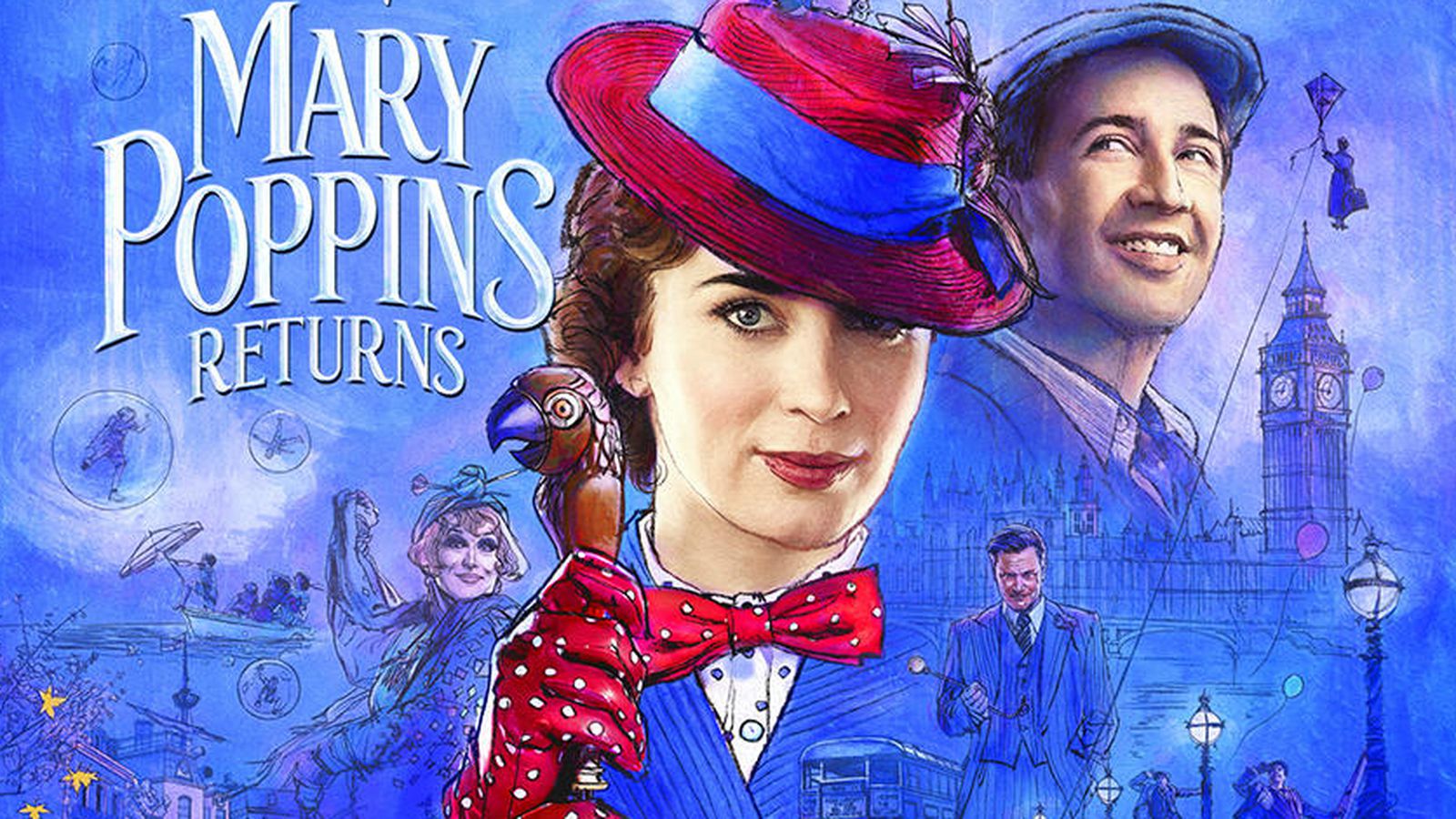 It was a brave moment in the marketing meeting at Disney HQ when some (probably junior) executive sheepishly said, “Why don’t we do a sequel to Mary Poppins?”

Imagine now, the following silence. Imagine the looks of incredulity and smug snorts of derision at such a preposterous concept. Disney had not long ago released ‘Saving Mr Banks‘, a beautiful film all about how difficult making the first film was, and how challenging dealing with P.L. Travers was. “Mary Poppins is an untouchable, beloved icon for generations of children! Why in god’s name would we want to make a sequel? What is there to be gained from it? Ok, yes, potentially a tonne of money, but what if it is a complete failure? Why would you take the risk?” Imagine now the discussion around the table coming to a long, strained silence…

“But what if we got it right?”

In Disney’s “Mary Poppins Returns,” an all new original musical and sequel, Mary Poppins is back to help the next generation of the Banks family find the joy and wonder missing in their lives following a personal loss. Emily Blunt stars as the practically-perfect nanny with unique magical skills who can turn any ordinary task into an unforgettable, fantastic adventure and Lin-Manuel Miranda plays her friend Jack, an optimistic street lamplighter who helps bring light—and life—to the streets of London.

Mary Poppins Returns is an absolute delight of a film that somehow manages to tread the incredibly fine line between being a timeless piece of loving nostalgia and a cleverly made film with modern sensibilities. More impressively though, is that it does so with incredible grace and style. Emily Blunt floats into the incredibly large shoes of Mary Poppins and within seconds of appearing on screen, has convinced us that this is the same whip-smart, magical nanny we fell in love with 54 years ago. Her clipped accent and sharp mannerisms bounce off Ben Wishall and Emily Mortimer‘s more natural performances in a strange and enchanting dance. Is this a children’s film? Is this a repeat of the first movie with more special effects? Are we doing magical realism or real magic? The film itself seems to delight in it’s own uncertainty.

Lin-Manuel Miranda hops, skips and jumps into the quasi-Bert role of Jack the lamp-lighter with a powerful shot of charisma and an equally powerfully appalling British accent. The sheer terribleness of it would normally be unforgivable, but somehow, here it manages to be endearing as hell, given the overt Van-Dyke-ness of the role. Its also worth mentioning that his usual musical style of rap is only touched on briefly and that he was not responsible for writing any of the music. Mark Shaiman‘s music is both familiar and new, but straddles the line between derivation and reminiscence artfully. These are all new, original songs that feel like they came from a movie made 50 years ago and hopefully will be embraced by a whole new generation. There may not be a new “supercalifragilisticexpialidocious” in there, but theres more than a few toe tappers to keep us entranced.

Meryl Streep‘s brief turn as Topsy is a loopy bit of fun and thankfully is not as over-wrought as some of her musical performances have been in other films. Blunt’s vocals are sweet and clear with nary a hint of auto-tune in there, and all the while the young cast of child-actors, Pixie Davies, Nathanael Saleh and Joel Dawson do an extraordinary job of selling the believability of the fantastical situations.

It would be very easy to see this as a re-hash of the first film and certainly it does hit many of the same notes, but it doesn’t feel like it’s doing so with any cynicism or ill-intent. In fact the note analogy is extremely apt. Music is only made from a collection of the same 12 notes, but arranged and played in different orders with different timings; yet there are an infinite number of beautiful songs. Just so here, there are similar notes and beats, but played differently and with a different tonality or intention. There is a beautiful traditional 2-D animated section which could be seen to be a repeat of the first film’s. There’s a bunch of dirty, dancing blokes high-stepping it around the London skyline. There’s an emotional core of a father learning to love and appreciate his family while facing financial pressure. All of which somehow manage to not be simply repeated notes, but halftones up or down that shift this music into a different space.

To many, Mary Poppins is one of the greatest films in the history of cinema; a whimsical and fantastic piece with memorable music, beloved characters, incredible visuals and a huge, generous heart. To others it was a saccharine betrayal of what P.L. Travers intended and a brash commercialisation of a series of beloved children books. No matter how you approach it though, it’s a piece of cinema history. Mary Poppins Returns could have many of the same criticisms levelled at it, especially given its creation in the wake of P.L. Travers‘ passing and the loosening of her estate’s grip. It may have been a money-grubbing executive’s hail-mary-pass; it may have been a passion project for a group of people who adored the original. We just don’t know.  It’s very tempting to say of Mary Poppins Returns, (to mis-quote another musical act) “This not the greatest song in the world, this is just a tribute.”
But that’s not giving it the credit it deserves. It is a wonderful, joyous ride down memory lane on a rickety bicycle, with a wink in your eye and a song in your heart and it really should be seen by everyone.

Reader Rating0 Votes
0
A film made in a way that hasn't been seen in 50 years, yet with modern technology
Real emotional clout and excellent performances along with some delightful cameos
Emily Blunt is as charismatic and enigmatic as Julie Andrews was in the original
The existence of the film is a testament to Disney's willingness to go back to the well. Often.
P.L. Travers' would no doubt be fiercely upset that this exists. Watch "Saving Mr Banks"
93
AWESOME