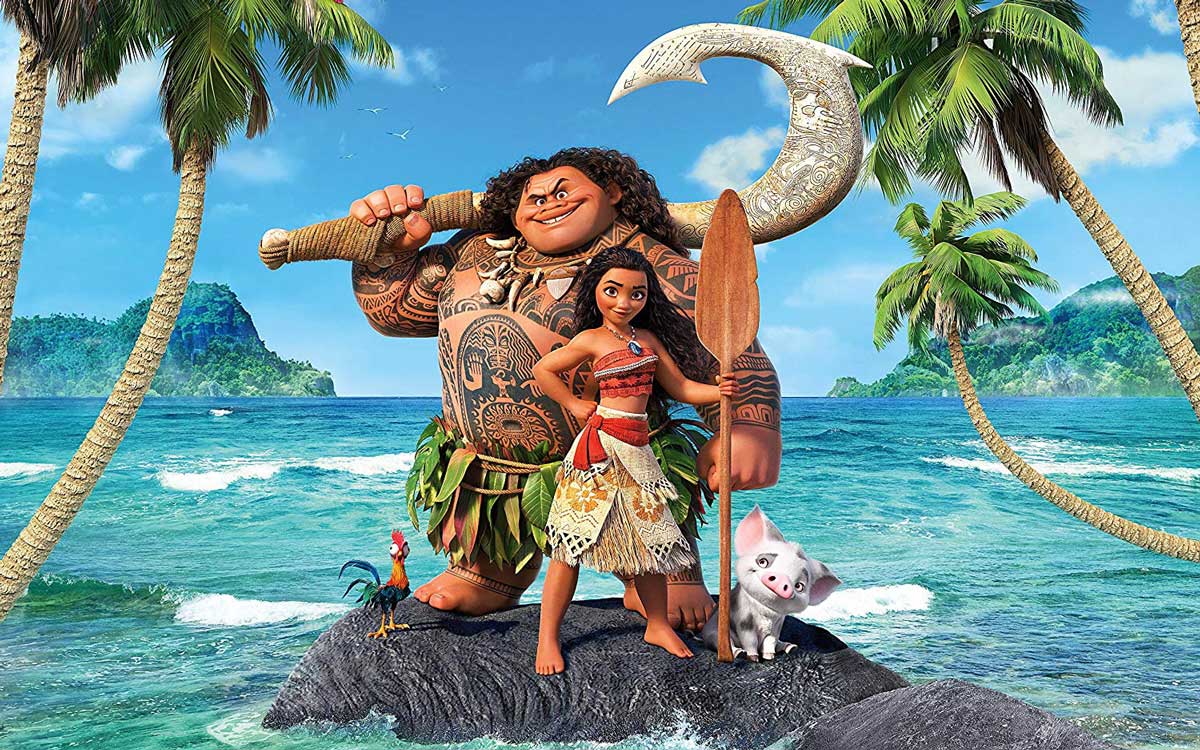 Moana is the latest release from Walt Disney Animation Studios, hot on the heels of massive hits like Wreck-It Ralph, Big Hero 6, Zootopia, and [the terrifying marketing behemoth that is] Frozen. Co-Directed by Ron Clements and John Musker, Moana takes us in a completely new direction for Disney stories, while at the same time feeling like we are coming home to something recognizable and comfortable. It is a prototypical coming-of-age story which could easily be compared with Pixar’s Brave, if only for its feisty female lead and powerful connection to the locations, cultural heritage, and mythology of its setting. It is also a musical, and as such it follows a long tradition of Disney animated films in which everyone (and everything!) sings. Moana’s strength and beauty is in its difference – another step in the evolution of the Disney Princess – and that turns it into something really special.

The tale begins on the small (fictional) Polynesian island of Motunui, an idyllic port from which a huge adventure will set sail. Moana (the astonishing Auli’i Cravalho) is the much-loved daughter of  Chief Tui (Temuera Morrison), which makes her a Disney Princess, as the film wryly points out. She feels a powerful call to the water and the open sea. Moana is beguiled by stories told by her grandmother  Tala (Rachel House), the village elder, about Maui (Dwayne ‘The Rock’ Johnson), the demigod who created the lands and trees, but who also cursed everyone by stealing and losing the mystical Heart of Tefiti. When Moana’s beloved island starts to suffer and die, she embarks on a quest to find Maui and heal her world.

She is joined on this adventure by a few allies. First and foremost, the Ocean itself, which  is shown to be a sentient character in its own right. Plus there is a clever ‘bait and switch’ where the adorably cute and plucky sidekick pig is shunted from the narrative to be replaced by the dumbest chicken in movie history. Heihei the chicken (played by the inimitable Alan Tudyk) provides slapstick comedy in bulk during the film, but somehow manages to make an almost entirely mindless character strangely lovable, if a bit frustrating. Rachel House’s “Gramma” Tala also provides important support throughout and is a genuinely lovable character.

It’s all good generic heroic action stuff, with mentors and monsters, quests and magical weapons, and if it were being done by another company it could have felt like a pretty twee affair. Disney has taken the time and effort to make this a story that matters. As always, there is more to be found here the deeper you choose to dig. On the surface it’s a coming-of-age story about a young person understanding their place in the world, but there’s also an allegorical story about nature and what happens when you over-exploit the natural world. It is absolutely rooted in the mythology and stories of the people it represents, and is seemingly not only respectful of them, but celebratory of everything they tell us about the modern world. That is one of the film’s greatest strengths: providing excellent role models for Pacific Islanders and representing their culture as powerful, proud and intriguing.

The music cannot go without mention either, since it’s where Moana becomes a thing of beauty.  Lin-Manuel Miranda, Opetaia Foa’i and Mark Mancina have worked together to deliver a stunning score that utilises the musical styles of the Pacific Islands: the harmonies and strong voices that are so beautifully recognisable. The character-based songs are the real high point though, with “You’re Welcome” showcasing The Rock’s vocal and comedic skills, as well as Lin-Manuel’s signature rap-singing style. Jemaine Clements’ Tamatoa manages to Bowie the hell out of “Shiny”, his monstrous and memorable number. But Auli’i is the real powerhouse with “How Far I’ll Go” and “I Am Moana” stepping bravely into the gargantuan shoes of Frozen’s “Let It Go”. This is a soundtrack you will have on repeat for some time to come (though hopefully not quite as long as Frozen‘s stuck around).

Moana is a visually stunning film and technically it’s a massive leap forward in terms of its use of water and liquid dynamics. It had to be, to make this story work. If you didn’t believe the water, the movement of the boats, and the people on them, you would not buy into the film. It’s beautifully paced, eye-wateringly gorgeous in its depiction of the islands and their residents, and the hair! My God, the splendiferous hair!  It’s very hard to find any negatives about this movie other than the somewhat predictable plot, but that doesn’t detract from the film as a whole. You will adore Moana, and by the end you’ll even grow to love Maui and that idiot,  Heihei. It’s a perfect summer holiday movie and it provides tonnes of entertainment while creating something much more meaningful and beautiful.

This is a full raft of awesome, and it’s smooth sailing from here on!

Reader Rating0 Votes
0
A STUNNING FILM YOU WILL BE SINGING ALONG TO IN NO TIME.
95
AWESOME