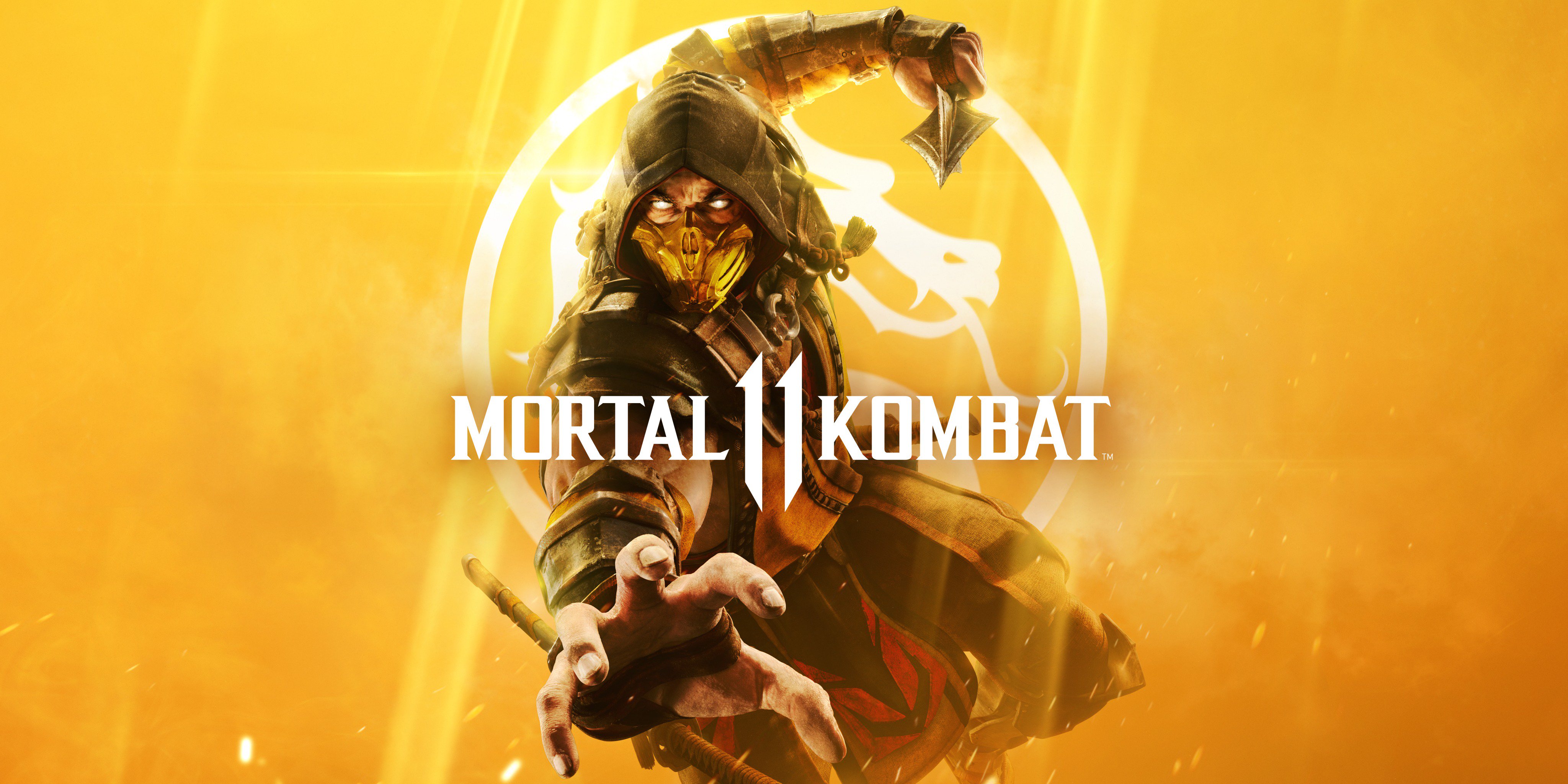 I’ll preface this entire review with a bit of personal history: I was a Street Fighter II kid. There; it’s out there. Now  I’ve said it. For the first few years as a 16-bit gamer I was all about that Capcom fighting-game goodness. Because they were the only fighting games in town at that stage, I initially thought that comparatively Mortal Kombat was a clunky, silly-looking, slow-moving game that relied too much on photorealistic graphics and ’80s action movie pastiches (in 1992). I mean, COME ON, the SNES version didn’t even have the RED blood! Street Fighter 2 had a bigger roster, more variety, and a deeper narrative. Plus SF2 got all those cool Turbo, Hyper-Fighting editions! Then in 1993 MK II happened, and everything changed.

Here was a well-written story that followed on from the canonical endings of the first game. Characters developed and changed. Some were sidelined. Others became more important to the story. There were exciting new bad guys, and more secret characters to discover. The game was much faster, the matches more frenetic and intuitive. This goofy narrative suddenly had me hooked and I couldn’t get enough. For the next decade I moved from game to game. I watched the movies, the cartoons, read the comics. I even became friends with Tracy Douglas, who played Vorpax in the TV series Mortal Kombat: Konquest and got a signed script from an episode! I immersed myself into that game universe and knew it inside and out. But somewhere around Mortal Kombat 7 or 8 (or MK vs DC?) I stopped. I got confused and the plot slipped away from my grasp. I tried to jump back on for MK X but somehow became totally lost in the labyrinthine narrative. Meanwhile, I developed a strong interest in the Injustice series and that about brings us up to date just in time for Mortal Kombat XI.

This series has been a staple of the gaming landscape for nearly 30 years so it’s only fitting that this entry into the main series plays with multi-generational stories and the legacies of decisions made in past games. It revels in its own convoluted history and twisted timelines, and in doing so extends a sly middle finger to those of us who may be considered the absolute die-hard fans; “Filthy Causals” (spelling intended, it’s a time travel pun).

If you have a passing understanding of the lore surrounding the Mortal Kombat series you’ll probably feel like you’re in safe territory: There’s Raiden the God of Thunder (played by long-time friend to #TPToA, Richard Epcar); Liu Kang, Shaolin Monk and Bruce Lee stand-in; Shao Kahn, emperor and armour fetishist, plus a bunch of different magical realms (including Earth-realm, Outworld and the Nether-realm) and a tonne of instantly recognisable characters from previous games. That’s where we leave safe territory behind, however, because  within minutes of firing up the story mode we’re ‘pits-deep into a convoluted time re-writing plot. There are both living and undead versions of multiple characters, younger and older versions of heroes interacting with themselves and their own children, and even good-guys-turning-bad to fight a villain who controls time itself. Make no mistake friends: it’s batshit insane. Somehow, though, it leans in hard enough to its own brand of insanity and its wilful goofiness that you forgive it for its excesses.

By the time the story mode is finished you’ll have played as most of the main characters and gotten a taste of what the fighting system offers… and let’s be completely frank: it’s good old “Mortal Kombat”. Not much has changed really, in the broadest sense. Each iteration has kept a lot of successful elements, and then built on or condensed the bits that didn’t work. You still have two punches, two kicks and a block, though the “run” button has been removed and some of the power-up meters of previous games have been streamlined or removed entirely. Gone are the in-match switchable fighting styles, with additional move sets and fighting styles only being selectable before a match.

It’s also worth mentioning the violence in this game, even though at this stage, after this many MK games, you really must be aware of what you’re getting into. The Fatalities are as ridiculous and over the top as ever, but sometimes the throws and Brutalities are wince-inducing on a very different, visceral level. The cutting, shooting, bone breaking, stabbing and wrenching that happens multiple times per match in full HD X-ray glory feels like it’s just a bit… excessive? Maybe i’m too old, or maybe I don’t think its necessary; but sometimes I just want to win the match! I don’t need to feel slightly sick at the incredible damage done to these almost photo-realistic characters. It’s the crunching backbone of the series, though, and there’s no point complaining about it: it’s what MK has always been about.

Special moves mostly fit into a formula of ‘Back-Forward-button’, though only a small number are shown in the pause menu cheat sheet. Experimentation and research is definitely encouraged, and the tutorials are exhaustively detailed. Fortunately, however, for the casual gamer, you can just hop right in, fling a spear or slide on some ice and feel pretty much at home in the MK play-style. There’s the basic versus modes, (online versus and the story you’ve come to expect), but it’s the Towers of Time and the Krypt which are both intriguing and infuriating at once.

The challenge towers are a system that has been in almost every MK game since Day One; here they’re  sometimes themed and offer varied challenges (both fun and frustrating) to unlock new items and collect “Koins”.  Attempting to progress through these can rapidly take the shine off the main game, since they’re often challenges that aren’t even slightly fair or remotely fun. In a game like Super Smash Bros., unlocking characters and further progress is achieved by playing different challenge matches which are either fun or intellectually interesting to negotiate. Here, it’s just one way of progressing and if you don’t like it, get ready to spend consumables to skip ahead. How does one find consumables? Let’s look in the Krypt…

In MK11 The Krypt is both one of the best and worst parts of the game; it’s a vast, nicely-rendered dungeon full of surprises… and our favourite: loot boxes! This concept has been given a huge graphical and narrative makeover from previous games, which shifts it from being a themed poker machine into something that feels almost like an actual adventure game. Shang Tsung (voiced joyfully by Cary Hiroyuki Tagawa) is your narrator and guide to a familiar lair: it’s on the same island that the first MK game was set on. You’ll wander around gleefully stumbling into locations from the first two Mortal Kombat games, including the Pit (above and below), Goro’s Lair, and numerous other familiar fighting arenas, all the while hunting for clues or locking mechanisms to open further sections. This is all surprisingly fun and adds some nice cultural history to the story.

Unfortunately, something ruins the immersion all too quickly: hundreds of loot boxes all over the place. Opening them reveals an apparently random selection of winnings, which might be a new Fatality, an awesome new skin, or a Brutality, but could instead be useless Krap and Konsumables which feel very much like you’ve been played. It’s essentially gambling away your hard earned Koins (earned by playing the game and also purchasable with real cash) on loot that really feels like a contrived way to artificially extend the game’s life.

For an old fan like me, MK 11 is a lot of fun and is definitely worth checking out. But also, like me, if you’ve been out of the loop on the story front, be sure to watch some of the excellent wrap-ups of the previous games available online before leaping headlong into this narrative. You’re diving right into the deep-end of 27 years of in-game lore, and you’ll get so much more out of this dense storyworld with a little bit of background exploration. If you’re simply after an enjoyable fighting game, you definitely wont be disappointed.

Reader Rating1 Vote
92
Familiar and fun fighting mechanics which sit atop a robust and complex system
A story that is completely insane in the best possible way, with a great cast bringing it to life
It's more of that delicious Mortal Kombat you've loved since 1992
The Koins and Loot Boxes in the Krypt feel a lot like gambling.
The Towers of Time are really not much fun.
The violence is somehow both ridiculous and all a bit too real at once.
88
AWESOME