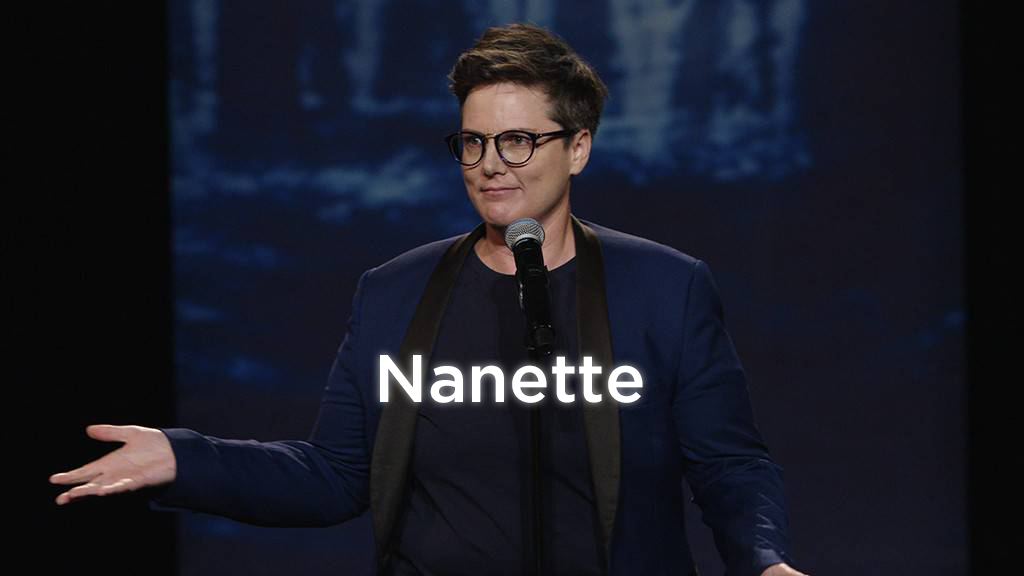 Hannah Gadsby’s Nanette is something completely unusual in the world of comedy specials: it’s not really a comedy special, it’s a treatise on the dangerous truth of being different in a small community, and the profound significance of being visible in the larger world. It’s also funny, so you can relax… for now. This style of show is not The Periodic Table of Awesome‘s usual geek genre fare, but Nanette is an instant classic that deserves the attention of any media critic (or fan). Nanette is also not the average knee-slapping stand-up comedy that Netflix hosts, and it’s commendable that they’ve had the vision to promote this work to a broad international audience. Hannah Gadsby deserves the spotlight.

Hannah is a 30-something Tasmanian stand-up comedian, writer and art historian, who is also a lesbian and renowned tea drinker. She has been a respected part of the Australian comedy scene for the last decade after being “discovered” in Triple J’s Raw Comedy in 2006. She has appeared in numerous TV variety shows, specials and series, including Underbelly, Please Like Me and The Librarians alongside her ongoing live stand-up work. Her sardonic style and self deprecating humour have been her hallmarks, with her disarming explorations of being queer in a small town and her personal fascination with art history forming an endearingly unique through-line in her work. Gadsby continues to play with these themes, but in new and intriguing ways. Nanette also shows us a performer who has not just found her voice, but is now unleashing a battle cry.

Nanette is an incredible piece of writing, let’s address that immediately. The performance is stunning and the simplicity of the staging underscores it perfectly, but the script is just blisteringly good. It coerces you to feel things, warns you that it’s going to do other things, does them, makes you feel bad about them and then reminds you that it warned you up front. It plays with you and seemingly allows you into Gadsby’s inner circle, but then turns on you and reminds you that this is Hannah’s story and you’re here by invitation only.  Structurally, it moves from a fairly standard piece of stand-up comedy in the beginning, to something far greater in its latter movements. I use the word ‘movements’ very deliberately, as, like a symphony, this show builds to a crescendo of such raw emotional power, that it would be impossible to not to be moved by it.

The turning point comes with the admission that Gadsby needs to stop performing stand-up comedy from now on, and from that point every story, every anecdote and parable lands like some unpredictable animal uncaged in the middle of the unwitting audience. Possibly it will do nothing… but maybe it will turn on this group, or another, until everyone is feeling just as unsafe under its baleful eyes. The audience who start out as a friend or confidant to Gadsby are, by the end, reminded that they are complicit in violations and that they can be — and should be — better. It is not comfortable viewing, but it is incredibly impactful. Gadsby is masterfully schooling us through every moment of the piece and never once lets us off the hook unless she fully intends to put us right back on there in a second.

Some viewers have raised the question of whether a trigger warning should be given with the show, and it’s well worth discussing. There is content in Nanette that could traumatise people who are sensitive to subjects such as sexual assault, rape and sexual abuse. Should this be more heavily signposted in the marketing for the show? Does warning people about these things deprive the performance of its ‘plot twist’?  Does hinting at the content mean that people who should watch this and be educated by it will avoid it because its one of “those” shows? Or is it simply something to assist people who have had traumatic experiences, giving them the information they need to make informed decisions as to their own mental health? Regardless, the show does have its shocking and powerful moments and it’s difficult to be certain if they would be any less powerful with more fore-knowledge.

I can’t recommend Nanette highly enough. It is magnificent: a masterclass in comedy, simplicity and form. It is brutally honest and unflinching, but also funny, loving and caring in the same breath.  It is something that everyone… seriously, EVERYONE needs to watch.