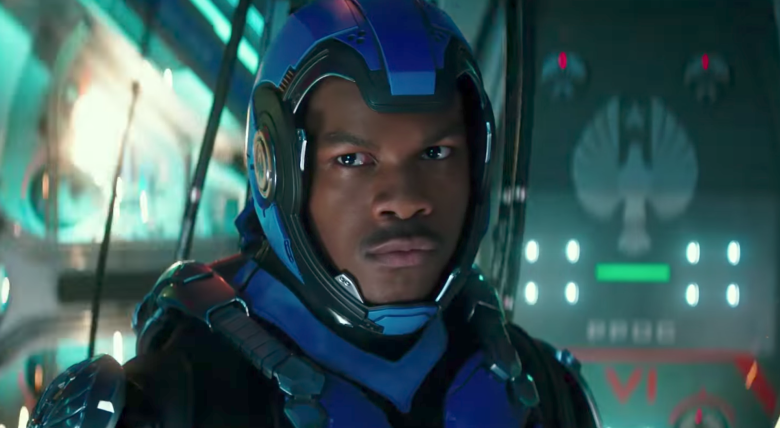 Pacific Rim, Guillermo Del Toro’s action-packed, robot-fighting extravaganza of 2013, came as a huge surprise to many viewers. Up until that point Del Toro had proven himself to be an exceptional director of horror and action with a flair for physical effects, gore and fantastic creations. Nobody could have predicted he would dive headlong into the Kaiju (怪獣, kaijū, Japanese for “strange beast”) monster-movie genre with such enthusiasm and creative passion. The title Pacific Rim told us nothing about what the film was about and it wasn’t until the first trailer was released that we finally understood what Guillermo had been making: a special effects-laden clash of the titans! (No, not that one). In this world, gigantic monsters had been destroying our cities for years, and instead of bombs we had turned to the single most sensible option available: giant freaking robots called “Jaegers”.

Pacific Rim never pretended to be anything other than what it was: a schlocky, almost B-Grade kaiju flick in the mould of Godzilla and Ultraman. It just happened to have the special effects budget of a reasonable-sized American action film as well as a director with a unique visual vocabulary. Its plot was paper thin and the characters ranged from ridiculous one-dimensional archetypes to out-and-out cartoons! But the thing is: it was fun and it had a palpable love for its source material. Like it or loathe it, it had heart. Pacific Rim Uprising is a sequel that most people thought would never get made, and some would argue should not have been.

John Boyega plays Jake, the son of Stacker Pentecost (Idris Elba’s character from the first film). Never mind that he was never mentioned in the first movie and it was implied that Mako was Stacker’s adopted and only child; that’s not important. Jake is living a carefree life of Jaeger-parts theft and partying in a world whose good folks no longer live in fear of giant monsters. However, when one of his illegal operations goes south, he’s thrown together with a plucky teenager (Amara; Cailee Spaeny) who has cobbled together her own mini-Jaeger. Soon she’s conscripted into a youth training programme for up-and-coming Jaeger pilots from around the globe. Cue the ethnically-diverse teenagers, hormonally-driven rivalries and eventual deus ex machina for the end of the film. Meanwhile, Jake butts heads with Scott Eastwood’s gruff-but-fair cardboard cutout Nate Lambert, and tries to gain the respect of his peers to become the Jaeger pilot he was destined to be.

If this review sounds cynical then thats probably because it is. It’s hard to see Pacific Rim Uprising as anything other than a cheaper-looking, by-the-numbers sequel that’s just an obvious attempt at making an ongoing moneymaking franchise out of a film that could easily have stood alone. It feels like a mixture of two rote sequel plots smooshed together into a messy gestalt that is somehow lesser than either of its parts. We have the “Next Generation of Heroes must come-of-age to overcome a bigger threat than in the first film” trope combined with the “Child of Original Hero must step out of parent’s shadow to overcome self-doubt” plotline artlessly combined to create a film that feels both incredibly obvious and deeply confused in the same breath. The seams where the different scripts were cut and pasted together are glaringly obvious; it depends on the flimsy strategy that pretty visuals and large scale action can get it over the line. Spoiler: They don’t.

Where the first film’s small number of Jaegers had extraordinary weight and heft, this one has attended the “everything more, bigger and faster” school of sequel-making and in doing so creates a series of ludicrously-named giant robots that look like a child’s collection of plastic toys. Toys which are then smashed into one another over and over. Unlike Pacific Rim, everything is shot in the daytime and too brightly lit; gone are the moody lighting, rain and water effects. The robots feel too clean and too fast; they don’t have the wear-and-tear of the first ones or the feeling of being handmade. They have names like: Bracer Phoenix, Guardian Bravo, Saber Athena, Vanguard Oberon and Obsidian Fury, (guess which one of these is not a real Jaeger; we dare you) but fairly quickly you will cease caring which one is which or who is piloting it.

The more drama-focused sections of the film are tedious but they seem to be the price we’re asked to pay for accessing the Robot/Monster action sequences. The teenage heroes, who at first seem like they’ll be the main characters, get completely sidelined into a B-plot which is then mostly forgotten about until the end, while Boyega and Eastwood do their best to make sense of the A-plot, with little success. Burn Gorman and Charlie Day’s characters are high points and along with Rinko Kikuchi they are the only real pieces of connective tissue to the first film. The absence of Charlie Hunnam is noticeable, which is in itself a damning indictment on the film, as he wasn’t exactly doing Shakespeare the first time around.

Pacific Rim Uprising is a disappointment because is should have been so much more. It descends into cliche and melodrama at a terrifying pace and seems to hit every branch of the “Stupid Tree” on the way down. At its best, it’s fun smashy-crashy action; at its worst, it’s boring drivel. I applaud the tenacity of the filmmakers for getting it made, but the Frankenstein’s monster of a script is glaringly obvious throughout, and the absence of Guillermo Del Toro’s unique storytelling style and passion is a gut-punch to the whole production. It feels a lot more like Power Rangers than Godzilla, but without the essential humanity of either.

Reader Rating1 Vote
11
Giant robots fighting giant monsters is always going to be somewhat entertaining.
Burn Gorman and Charlie Day are having a lot of fun and are the best part of the film.
Seeing your home city smashed up is an entertaining treat
Uninspired writing and cliche-ridden plots… Plots being plural.
Uninteresting teenage heroes whose sub plot gets forgotten about anyway.
A movie sorely lacking in Guillermo De Toro and Charlie Hunnam.
67
AWESOME