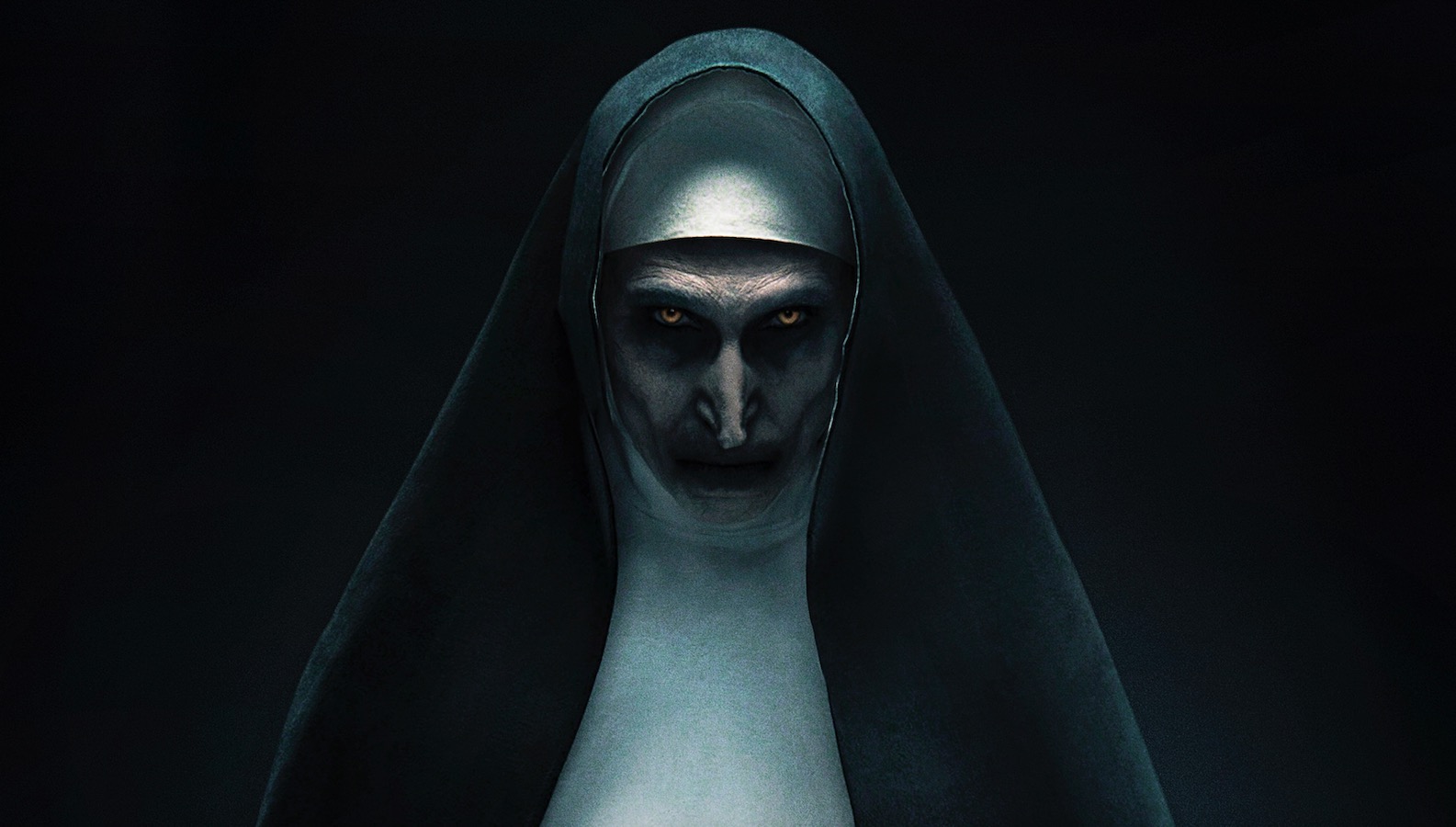 In 2013 The Conjuring franchise made its debut; since then, its spawned an extraordinary four sequels (or spin-offs). Directed by James Wan and written by Chad Hayes & Carey W. Hayes, The Conjuring re-imagined The Amityville Horror for a new generation, and in doing so launched a number of sequels and extended universe pictures based on sequences and creatures from those two initial films.

The franchise’s storyworld fractures into splinter films. Following Annabelle and Annabelle: Creation,The Nun is the second of these splinters (and like any second splinter, it can be greeted with a resounding  “Oh, for fucksake”).

In this film (directed by Corin Hardy and written by Gary Dauberman) we move away from the ’70s Rhode Island setting of The Conjuring to ’50s Romania, and it doesn’t miss a trick from the “Hammer Horror School of Romanian Cliches”. We got your creepy graveyards, we got your superstitious Romanian villagers, we got your murders of crows, and of course, we got your hanging dead bodies… get em while they’re hot! Into this potboiler we throw Father Burke (Demián Bichir): a Catholic exorcist and professional miracle hunter, along with Sister Irene(Taissa Farmiga), a novice nun who has, in the past, experienced some form of possession. We are also introduced to a French-Canadian handyman / Lothario / vegetable delivery-man called “Frenchie” (Jonas Bloquet). This kind of on-the-nose naming would normally be insulting to us as an audience, but since all the accents were so confusing and ever-shifting, it came as something of a relief to know that here was one character who was actually meant to sound French! (Unless he was sounding Canadian… or just ‘generically European’).

These characters take turns exploring a number of confusing set pieces in the spooky Cârța Monastery, where things drifted a long way from “godly” some time ago, and are now sitting tonally somewhere between ‘Event Horizon in a Church’, and ‘The Slightly Scarier Scooby Doo Spooky-Coaster’. Scene after scene of seemingly unrelated sequences, each a single-concept scare, get played out ad nauseam with little to tie them together in terms of an actual plot. There is sporadic back-story and character development scattered through the script, but frustratingly, it must be diligently panned for like tiny specks of gold amongst clouds of river silt. Mostly it’s just a bunch of cliched barely-scary scenes that play out like a bingo game of horror tropes: here’s the bit where the shadow moves around the wall like Nosferatu; here’s the bit where the guy chases down the demon child from his shady past (as you do); here’s the bit where the hands pop through the wall to strangle you… BINGO!  It’s by-the-numbers horror and it rarely manages to surprise, let alone scare.

At the centre of it all is the titular demonic Nun: Valak (Bonnie Aarons), whose origins seem to be incredibly flimsy even by horror standards. Her motivations and intentions are never made clear and as such there is no sense of impending danger or doom to her machinations and manifestations, aside from some vague idea that “She’s all a bit evil isn’t she? I hope we can get away from her.” Is her influence spreading? Does her evil power threaten the rest of the world? Is she responsible for all the ghosts in the place? Who knows… and honestly who cares? Given her eventual arrival as a painting in The Conjuring 2, we also have to assume that no matter the outcome of this film, it’s all a fait accompli.

It’s reasonably well shot and has some very atmospheric locations, but its also incredibly workmanlike and feels both cheap and uninspired. Abel Korzeniowski‘s score (and the sound design as a whole) never manages to elevate itself above passable, and the editing is surprisingly lacking in pace: what should be suspenseful sequences became boring… or worse, funny.  The performances though, range from bravura to bratwurst, and this is the real kicker: if your audience is laughing at your horror film – not in that “nervous-but-too-scared-to-admit-it” way, but because it’s just goofy – you have serious problems.

The Nun in certainly far from the worst horror film out there, but realistically it should be called “The None”. As in: how much connection is there between scenes? None. How much desire to revisit these characters? None. How many scares really hit home?  None. How much hope should people have for a sequel?  Yep… None.  The Conjuring franchise is apparently a long way from being tapped out completely, but if this is any indicator, the well is running worryingly low.

Reader Rating0 Votes
0
Some nice design elements and occasionally atmospheric sequences.
It is funnier than it is intended to be… you will likely laugh.
It is a cobbled together hodge-podge of disconnected scenes.
The scares are telegraphed and obvious and it relies very heavily on tropes and cliches.
30
AWESOME