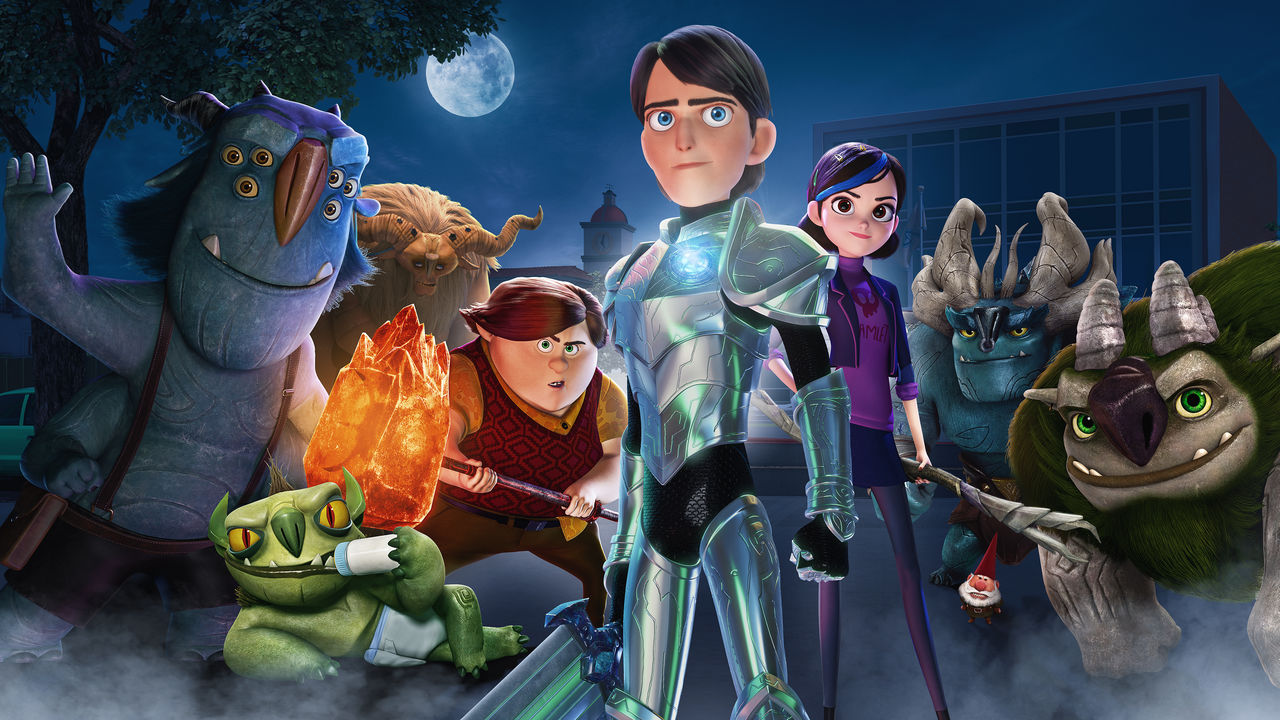 Guillermo del Toro is probably best known for his cinematic journeys into into the horror realms;  from the sulphur-coloured super-heroics of Blade 2, to the baroque horror of Crimson Peak, by way of pit-stops into Pan’s Labyrinth and Hellboy country to boot. In each of these worlds he’s been instrumental in defining their unique visual language, utilising his incredibly singular aesthetic. Now he has turned his attention to a very different style of project, but one for which his style is a perfect fit. Its not a horror and it’s a LONG way from the monsters and mayhem of Pacific Rim, but Trollhunters is the joyous explosion of Del Toro’s vision into the shape of a children’s cartoon series!

Based on the young adult novel of the same name co-written by Guillermo del Toro and Daniel Kraus, Trollhunters introduces us to Jim Lake (as played by the late Anton Yelchin), a teenager with all the usual issues of teenager-dom: he has to deal with school, teachers, bullies, friends and of course, girls. He comes from a broken home and lives with his overworked mother, who he does a heck of a job looking after. He is the prototypical “everyman” who is the perfect blank slate for a catalytic McGuffin (in this case an amulet) to intersect with. This intersection sets him on a path of super-powered wish-fulfilment fantasy that our viewers are supposed to identify with and then want to emulate (please see Transformers Prime, Ben 10 and Max Steel for other examples).  There, we’ve now taken our first lesson in “Basic Storytelling for Cartoons 101” aren’t you happy you signed up to this class?

Trollhunters is an absolutely by-the-numbers example of cartoon storytelling structure, and in the hands of any other creator I might have been ready to absolutely tear it apart. But its not anyone else – this is del Toro! Here a typical coming of age romp filled with monstrous bad guys and magical armour goes from passé to prosaic, and under his guiding hand it becomes really enjoyable TV! Over the space of the 26 episodes now available on Netflix a really fun and well paced adventure unfolds. It manages to tell a fairly sprawling tale of two worlds learning to live with one another, but in a kid-friendly and just slightly scary way.

Initially we are introduced to a heroic Trollhunter, Kanjigar (voiced by Tom Hiddelston!) who is locked in battle with a dark and malicious troll called Bular (Ron Perlman). But this is a battle he cannot win, and due to the troll’s acute reaction to sunlight, he is killed. The magical amulet which grants him the mantle of the Trollhunter then chooses a new wielder: Jim, and the first human Trollhunter is created. He is soon introduced to his mentors, two trolls Blinky (Kelsey Grammer) and AAARRRGGHH!!! (Fred Tatasciore) who try to educate him in the ways of Troll society, the history of the Trollhunters, and the mythology of their realm. The evil Bular is working with a mysterious man called Strickler (Australian Jonathan Hyde) to build a gate that will allow his father to be freed from his ancient prison. Strickler also happens to be one of Jim’s teachers and eventually becomes a suitor for Jim’s Mother’s affections. There’s changeling babies, Shakespeare plays, prom kings and queens, mysterious international cabals and plenty of other twists and turns all within the first 13 episodes, then, somehow, in the second half of the season, things get even more complicated!

Jim’s journey to becoming a fully-fledged Trollhunter is an astonishingly well balanced affair. There are very few episodes that feel superfluous or flabby. Even episodes that might initially feel like fluff pieces introduce characters and situations that have pay offs later in the series. It should be noted that this is a series that works best viewed in chunks, and most assuredly should be watched in order. This is a strong ongoing story-arc based show, not your usual monster of the week kids cartoon. Yes, some episodes could work stand alone, but realistically this is designed for watching in order. Characters grow and develop naturally and relationships change and evolve as the series plays out. It manages to use so many stereotypical tropes of the teen power-fantasy genre in new and creative ways, and while not breaking the rules it really does bend them a long way. Even sidekick Toby (Charlie Saxton) and love interest Claire (Lexxie Medrano) get in on the action at times and become powered up and bad-ass-ified eventually.

It is the design though, the stunning, intricate and unique design, that sets this show apart from the pack, and here is where del Toro’s finger prints can be seen the most. Trolls are pure, unmistakable GDT; scarred skin, chunky shapes, bulky weaponry all feels like its carved from ancient stone. They look, for all the world, like they could have been extras wandering through the backgrounds of Hellboy or Pan’s Labyrinth. Locations such as The Troll Market and The Darklands are magnificently realised, with huge amounts of detail in every facet and some really clever lighting choices. These then give such a clear differentiation to Arcadia; the everyday world of the school and the kids homes. Detail heavy elements like the amulet and Jim’s armour also are high points in the design of the show. Some of del Toro’s signature ideas sneak in there too, with clockwork-based design showing up regularly and even a Hellboy-like robotic hand makes an appearance.

Trollhunters is damn good TV. It’s fast-paced and clever. It doesn’t talk down to its audience and even throws in gags clearly aimed at the adults watching along (Gnome Chompsky is my favorite character name. Ever). Trollhunters understands its audience and plays to them, utilising the tropes of the genre to its benefit and not to its detriment. Yes, Jim’s magical armour gets upgrades (or power-ups) which could easily be used to sell more toys, but in the context of the story, these upgrades fulfil a narrative purpose too. Trollhunters could so easily have been just another tween cartoon series for boys, but its elevates itself above the rest to become something far better. Its progressive, intelligent, artistically complex TV and is well worth checking out for kids and adults alike.

Reader Rating3 Votes
82
A KIDS SHOW THAT PUNCHES ABOVE ITS WEIGHT!
80
AWESOME