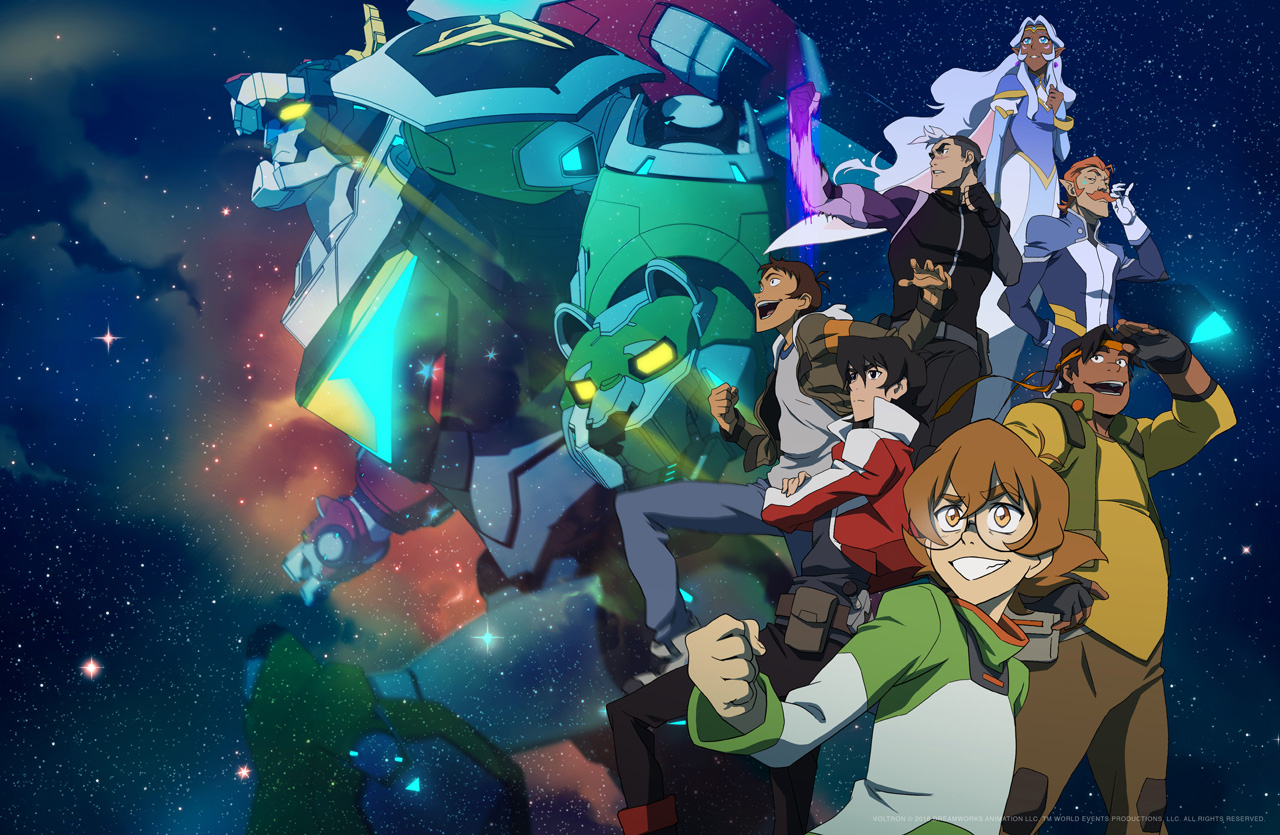 With the second season of Netflix’s new Voltron: Legendary Defender series now available we thought it worthwhile to look back at the first 11 episodes of Season 1! We should also look at some of the other Voltron related shows that have come and gone over the past 30 years since we were first exposed to the gigantic gestalt feline robot. In 1984 we were introduced (thanks to the growling tones Optimus Prime himself, Peter Cullen) to a new cartoon group of teens that would take control of a collection of magical (and technological) robot lions that came together to form a giant combined robot called Voltron, in Voltron: Defender of the Universe. Based on the anime series Beast King GoLion, this first series was hugely successful and captured the imagination of a whole generation of children. Based on its success the second season tried to capture the same lighting in a bottle by adapting a completely separate series Armored Fleet Dairugger XV, and re-branded it as Voltron as well. This “Vehicle Team Voltron” was not as successful and only managed to muddy the waters of the Voltron brand.

The concept of a colour-coded team of youths piloting giant robots was nothing new in Japan. The Sentai series Gorenger had come out in 1977, however in the West this was something relatively new and special. The mix of mysticism and technology was exciting and very much the flavour of the minute (He-Man, Thundercats, Visionaries, She-Ra and Bravestarr all mixed magic and technology to varying degrees of success) and even the formulaic plots and repetitive combination animations could do nothing to dampen kids enthusiasm for this show. Over the 72 episodes of this first series we were introduced to planet or Arus and its royalty as well as the six characters who would pilot the five lions of Voltron; Keith, Lance, Pidge, Hunk, Sven and eventually, Princess Allura. They faced off against the tyranny and evil of King Zarkon, his Son Prince Lotor and the Witch Haggar of the Drule Empire. The plots essentially revolved around Haggar making giant “Robeasts”, flinging them at planet Arus and their inevitable defeat by the Voltron team. Rinse, repeat.

It was incredibly formulaic but it struck such a strong chord with kids, and the toys were such a powerful marketing tool, that the show really connected with people – so much that after the 1986 movie “Fleet of Doom”, Vehicle Team Voltron was basically forgotten. “Lion Force” Voltron, however, has been re-imagined a few times since. In the late 90’s we were treated to Voltron: The Third Dimension. A direct sequel to the 80’s cartoon that used CGI to bring Voltron to life in a style reminiscent of Transformers: Beast Wars. Unlike Beast Wars, it wasn’t well received, and despite having many original voice-cast back on board, it only got 26 episodes. Then there was a long hiatus until 2011’s Voltron Force.

Voltron Force was a hybrid traditional animation and CGI series that expanded on the Voltron story by adding a new generation of recruits, as well as new powers and configurations for Voltron itself. It has a bunch of cool ideas, including allowing different lions to be the central one, which then unlocks different powers, but sadly it came off feeling a bit cheap and hokey, and only got 26 episodes. There have also been numerous abortive attempt at getting a live-action feature film up since 2005. The most recent script being penned by David Hayter as of November 2016…  we are yet to see them actually come to fruition.

And that brings us to Voltron: Legendary Defender. This is a show that takes the best elements of the Voltron story and re-imagines them for a new generation of fans. Again, it uses a hybrid CGI and traditional animation method, but here the seams are better blended and the action feels a lot more cohesive. The lions, Voltron and most of the Robeasts are all CGI but the interaction with them doesn’t feel like two disparate styles butting into one another. The traditional animation too, is of an exceptional quality. It feels more like the traditional Japanese anime style with dynamic movement and interesting camera angles, but also with the lower frame-rate which adds to the anime feeling. The colour pallete is more subdued, more pastel, and on the whole the redesigns feel like a beloved misty-eyed memory of the Voltron of our youth, as opposed to a modern style of cartoon. If people saw the re-imagined Thundercats of a few years back you’ll recognise the style which is more about ideas and thematic choices than modern animation technology or bright, sharp visuals.

This is a re-boot of the entire story, and there are many changes in the narrative and characters.  Sven is gone entirely and the (sort of) new character Shiro (Josh Keaton) now takes the leadership role above the bickering of Lance (Jeremy Shada) and Keith (Steven Yuen). Pidge (Bex Taylor-Klaus) has one of the best character arcs in the series and Allura’s role (Kimberly Brooks) has shifted from pilot of a lion to piloting the flying battle station that is the castle. Hunk (Tyler Labine) retains his role of “lovable food hoover” while being gifted with an unsettled stomach to boot (many vomit gags abound). New characters like Rhys Darby‘s Coran are a real joy, bringing a lot of colour and humour to the series. The universe now feels like its been populated by a lot more interesting and colourful characters as well. The bad guys are also given a face lift and are no longer “Drules”. They are now the Galra Empire, lead by the much more intimidating King Zarkon (played impressively by Neil Kaplan). Supported by his personal witch Haggar (Cree Summer) and Commander Sendak (Jake Eberle), Zarkon’s back-story is much more interesting in this incarnation and is revealed at the end of season 1 that he was the original Pilot of the Black Lion!

Only a few episodes in to Season 2 it’s abundantly clear that the quality of the storytelling and the level of creativity hasn’t dropped a micron. The universe these characters inhabit is beautiful, diverse and magnificent. Their relationships and interactions are growing deeper with each story arc and we know that this is a team who will be entertaining to journey on with. The first season was so good but felt so short – like it was just the first nibble of a much larger pie. Season 2 promises to be a much more filling helping of a wonderfully rich and tasty dish. If you haven’t checked it out yet, get your dynotherms connected and go!